In order to understand what intensity-modulation is, and why it is important, you need to understand some basics about conventional radiation therapy and how it is used.

The radiation beam produced by essentially all modern radiation therapy machines is similar to the beam produced by the regular “diagnostic” x-ray machine with which you are already familiar. The x-rays are produced in the machine electrically; there is nothing radioactive inside. The beam of radiation comes out as a rectangular “cone” – similar to the light beam of a slide projector or movie projector. In a diagnostic x-ray machine, the x-rays pass through the body and then strike a film or detector, producing an image of what is within the body. With a therapy machine, the beam passes through the body and is absorbed into the thick walls and floor of the treatment room. On the way through the body, however, the x-rays kill cancer cells in the target area. They also, unfortunately, kill some good cells on the way to the target and on the way out the other side.

There are two main differences between a diagnostic x-ray machine and a therapy machine (linear accelerator, or “linac”):

Earlier we compared the “cone” of a radiation beam to a slide projector. There are several ways in which the two are similar. In both cases the beam, once it leaves the source, will travel in a straight line until it is absorbed; it cannot be bent or steered in any way. The shape and size of the cone can easily be altered by placing shutters or radiation-absorbing blocks within or on the edges of the beam. Both the slide projector and the x-ray machine are carefully optimized to produce a beam that has an even intensity, or “flatness”, all the way from corner to corner. And in both cases, the intensity of the beam can be modified if a filter or absorber is placed in the path of the beam. This absorber can be a simple “flat” filter that reduces the intensity of the beam uniformly, resulting in a beam that is still flat, but less powerful. Or it can be a more complex filter that reduces the intensity of some parts of the beam more than others, resulting in a beam that is no longer flat. This utilization of a beam that is intentionally non-flat is intensity modulation.

Intensity modulation can be used in many situations, but it is probably most important when trying to deliver a high dose of radiation to a target (tumor) that is very close to an organ that cannot tolerate much radiation. Tumors very near to the eye or spinal cord would be good examples. A very common situation is found in prostate cancer where the cancer is practically inseparable from the rectum. The amount of radiation that is needed to cure the prostate cancer might well injure the rectum. We’ll use prostate cancer for the rest of this explanation. 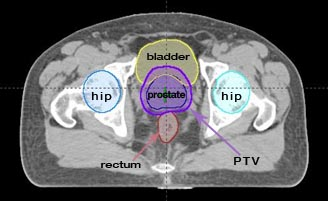 The figure above is a CT scan slice across a man’s body, just above the pubic area and right in the middle of his prostate gland. The prostate is the black circle. The challenge is to deliver a high radiation dose to the prostate while protecting the rectum, bladder, and hip joints. Of these, the most vulnerable to radiation effect is the rectum. There is literally nothing between the rectum and the prostate. The lavender circle surrounding the prostate gland is the actual target for the radiation treatment, called the Planning Tumor Volume (PTV). For prostate cancer the PTV is the entire prostate gland, plus a small space around it in all directions. Here we have used 7mm in each direction, except toward the rectum where the distance is only 4mm. This is to allow a margin for the possibility that some cancer cells may have escaped through the wall of the prostate. The PTV is the real target for radiation therapy, so hereafter we’ll show just the lavender circle. 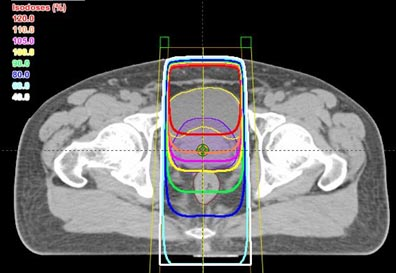 The illustration above shows what would happen if we tried to treat the prostate with a single radiation beam from the front. The yellow line is 100%, so the whole PTV receives the prescribed radiation dose. (We will keep the yellow line covering the prostate in all the subsequent pictures, for consistent comparisons.) With a single beam, most of the bladder receives 20% MORE radiation than desired. We must do better than this! 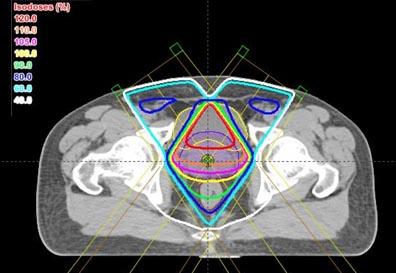 Above, two anterior oblique radiation beams have been used. The yellow again covers the PTV, and the amount of bladder getting too much radiation has been reduced significantly, but this is still not a good plan. We need to further reduce the bladder dose and get more even distribution of dose in the PTV. 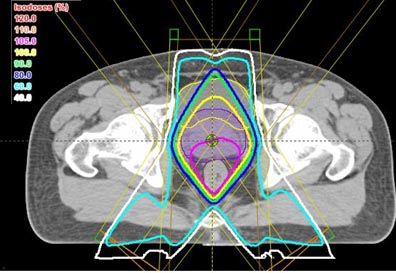 With three beams – one from the front and two angled from the back – things start to look better. We have eliminated any areas where the dose is 10% or 20% too high, and the prostate still gets the same 100% dose. But the area getting 105% covers the rectum, which is what we wanted most to protect. 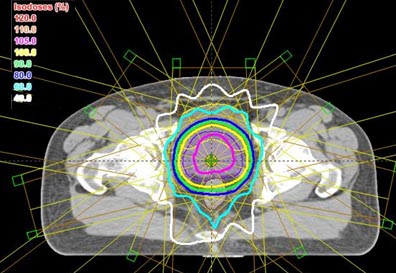 Going from two beams to three made a big improvement, so here we have gone to seven beams. This is much better. Now the only part getting more than 100% is actually within the prostate, which might even be a good thing in the ability to kill more cancer cells there. But a major part of the rectum is still getting as much radiation as the PTV, which increases the side effects and risk of later complications. 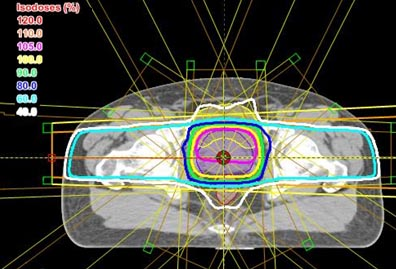 Increasing the amount of radiation coming from the sides can help to reduce the dose to the rectum, but in doing so it has increased the dose to the hip joints. We need more options! It’s time at last to introduce intensity modulation. 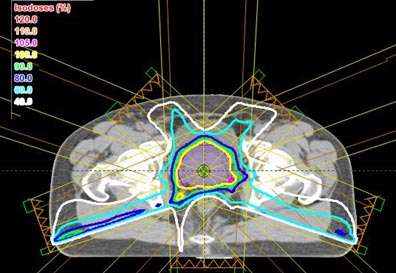 In the above plan only five beams are used, instead of seven, but the intensity of each beam is no longer flat across its width. Now each beam can be more intense in one place than another, as you can see from the unusual entrance pattern in the beams at 4 and 8 o’clock. Now we have succeeded in covering the whole PTV with the yellow 100% line, there is no hot spot in the center, and the dose to the rectum falls very quickly to 40%, which will be well tolerated. This is still not a perfect plan; there is a little yellow spot and a tiny red spot that can probably be reduced with a little fine-tuning. But this IMRT plan is much better than any of those above.

Above is yet another IMRT plan. This one is done by rotating the radiation beam around the patient while doing the modulation simultaneously; it’s the equivalent of perhaps 50 different beam angles, each one with optimized intensity. With this plan, the yellow 100% line follows the PTV almost perfectly, there are no hot spots, the gradient is sharp for the rectum, and the amount of the body receiving 60% is further minimized. This sort of plan can be executed by the Varian RapidArc or TomoTherapy technologies. For prostate cancer, the plan and the one above would be equally effective, but in some very critical tumor sites there is an advantage for the full rotational technique.

All of the above plans are shown only in a single slice – in two dimensions. In real life, the body and the target are three-dimensional. The shape of the body, the position and shape of the target, and the position and shape of the other normal structures will change from slice to slice. The calculations and optimization needed for three-dimensional planning are far beyond the ability of a human lifetime, but modern computers have made them possible. Three-dimensional treatment planning is done by specially-trained dosimetrists, on powerful desktop computers, in all major radiation therapy centers and in many smaller centers as well.

Now that we have a plan, we need to actually modulate the radiation beam while treating the patient. The basic medical linear accelerator is engineered to produce a radiation beam that is as flat – as uniform intensity across the beam – as possible. But we want to treat with beams that are un-flat, and un-flat in complex but controlled ways. There are several solutions.

Some facilities construct, cast or mill custom brass filters for each patient, one for each radiation beam employed. These filters (which are actually heavy, jagged brass blocks) are placed into the beam at the head of the linear accelerator, and the radiation beam passes through them on the way to the patient. When the beam passes through a thick part of the filter, it is attenuated more than by a thin part, creating the desired un-flat beam. Multiple such beams, coinciding in three dimensions, will produce the desired deposition of radiation energy.

Most centers use a device called a multi-leaf collimator to modulate the beam as it emerges from the accelerator. It operates under computer control to give many short bursts of radiation from each of the beam directions, while changing the shape of the beam between bursts. Areas covered by many bursts will get more radiation than areas that are covered by just one burst, or only a few. For rotational therapy, such as the last example above, the multi-leaf collimator changes constantly as the radiation beam rotates around the patient.

IMRT is not just a matter of buying a machine and putting it to work. It involves both computer equipment for planning the treatment, and large multi-million-dollar linear accelerators for administering the treatment. Medical Physicists assist the radiation oncology physicians in overseeing the whole process, and are responsible for the large amount of ongoing quality-control that is necessary. Dosimetrists take the dose prescription of the physician and operate the computers that turn it into an optimized treatment plan for the doctor’s approval. Radiation therapists care for the patient directly, assuring that positioning is correct and reproduced accurately, and then operating the complex, computerized process of actually administering the treatment.

IMRT also places real demands on the radiation oncologist. Advances in medical imaging have made it more possible than ever before to know the position, size, and shape of the tumor, and the adjacent structures where radiation dose should be minimized. The radiation oncologist must, however, also use his or her knowledge and medical judgment to decide what areas of the body might harbor undetectable cancer than should also be treated, and to know what doses of radiation are necessary for cure, and tolerable for normal tissues. With the enormous flexibility of IMRT, it is possible to err by becoming too aggressive and causing damage to normal tissues, or by being too conservative and failing to give an adequate dose to all of the cancer cells. This means that the radiation oncologist must be not only well-trained, but current in all the latest knowledge and applications of IMRT.

In recent years, there has been a good deal of advertising of cancer services that would lead one to believe that a certain treatment machine is better than all the rest. This is simply not true. A wise patient first selects the radiation oncologist and radiation oncology team that he or she trusts most to deliver quality care. The choice of the specific treatment tools and methods can then be left to the judgment of the radiation oncologist. At Radiation Oncology Associates, we offer almost every current technology in radiation therapy. If a patient should require a treatment we cannot provide, he or she will need to leave the Baltimore/Washington area to obtain it. Our radiation oncologists usually have personal relationships with the doctors at specialized facilities in other cities, and do not hesitate to telephone and facilitate a referral when it is appropriate. 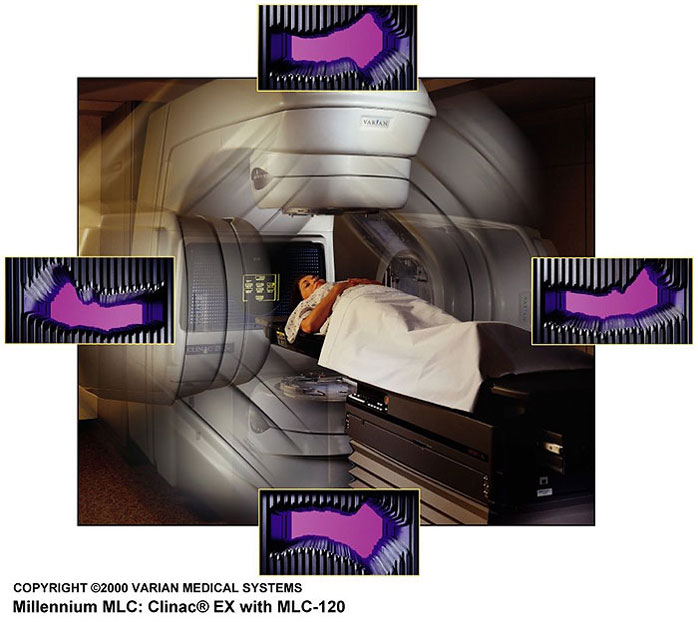