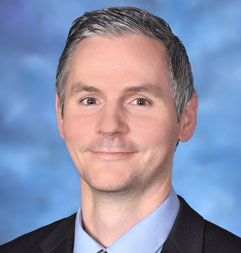 Dr. Christopher “Bryce” Johnson joined Radiation Oncology Associates in 2021. His clinical interests include treatment of thoracic, genitourinary, head & neck, breast, gastrointestinal and central nervous system malignancies.
Dr. Johnson grew up in Chesapeake, Virginia, and graduated from the University of North Carolina at Chapel Hill with a degree in biochemistry. He was awarded a top recruitment scholarship to the Medical University of South Carolina, where he entered the MD/PhD program. In his doctoral dissertation, Dr. Johnson investigated ways to use the immune system to fight cancer. He was nominated to AOA, the medical honor society, for his achievements at MUSC. Dr. Johnson next began residency training at Memorial Sloan Kettering Cancer Center in New York City. There, he served as Chief Resident and became proficient in multiple advanced radiation modalities, including HDR/LDR brachytherapy, stereotactic radiotherapy, proton radiation, intensity modulated radiation therapy and volumetric modulated arc therapy. Dr. Johnson has authored dozens of peer-reviewed publications and has won multiple prestigious research grants, including the F30 National Research Service Award and a Parker Institute for Cancer Immunotherapy grant.
Dr. Johnson is board certified in radiation oncology. He is thrilled to be a part of the Inova team and in his home state of Virginia. He will be seeing patients primarily at the Inova Schar Cancer Center in Fairfax and the Potomac Radiation Oncology Center in Woodbridge. Outside of the clinic, Dr. Johnson enjoys playing sports and spending time with his wife and three children.